Herd immunity is a fundamental concept that contributes to the success of many vaccination programs. Control of many vaccine preventable diseases is contingent on a significant proportion of the population in a community being immune. Depending on the disease, the percentage of individuals required to achieve herd immunity in a community ranges from 30% to 95%. Traditionally, immunization rates have been maintained in the United States through mandatory vaccination requirements for entry into and advancement through licensed child care centers and schools. 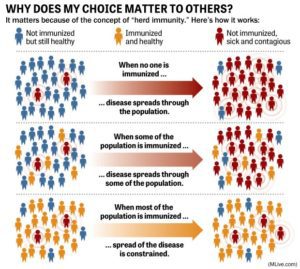 However, recent years have seen a marked increase in the availability and use of “philosophical” or “personal belief” exemptions from vaccination. Over the period from 2005 through 2011, there were reported that the unadjusted rates for nonmedical exemptions in states that allowed for philosophical exemptions were 2.5 times higher than in states that allowed only religious exemptions.
In Arkansas, rates of overall exemptions increased an average of 23% per year once philosophical exemptions were allowed. Studies have demonstrated that parents who refuse vaccines are more likely to be white and more highly educated than those who do not. In addition, the prevalence of vaccine hesitant parents seems to vary geographically. It is unclear whether requiring a mandatory physician visit or educational module for parents who apply for vaccine exemption in states with philosophical exemptions is effective in reducing refusals. Children who are philosophically exempted from vaccination not only are at greater risk of developing vaccine-preventable disease but also put vaccinated children and medically exempt children who live in the same area at risk.
Vaccine-preventable diseases occurring in vaccinated children may result from waning immunity after immunization or may be attributable to an ineffective immune response to vaccine initially. In January 2015, a measles outbreak occurred in California, where an estimated 3.1% of kindergartners had a nonmedical exemption from receiving the measles–mumps–rubella (MMR) vaccine. Most of the cases occurred in children who either had not received measles vaccine (45%) or had unknown vaccination status (38%). Of the cases in unvaccinated children, 43% of parents cited philosophical or religious objects to vaccine. An additional 40% of unvaccinated children could not receive the vaccine because they were too young. This outbreak, which spread to multiple states, has sparked intense debate about vaccine exemptions and the government’s role in limiting nonmedical exemptions.
Whether the 2015 outbreak and legislation resulting from this outbreak will have a long-lasting effect on public policy and parental choices is not clear at this time. For these reasons, we believe the better approach is to work to eliminate all nonmedical exemptions for childhood vaccines, a position that is shared by the American Medical Association and the Infectious Diseases Society of America and is currently the basis of a policy statement being developed by the AAP. There has also been greater recognition among pediatricians that delayed or incomplete vaccination schedules are probably responsible, at least in part, for the spread of measles in that outbreak. As a result, more pediatricians are becoming concerned about the risk unimmunized children pose to other children in their practices, both immunized children and those too young or otherwise unable to be immunized. Some are electing to dismiss families who refuse vaccines from their practices The ethical considerations of patient dismissal are complex and of great concern on every side.
Next blog (What’s In the Vaccines we take?)