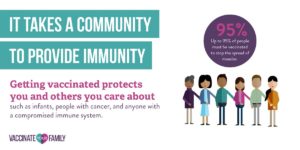 Community immunity occurs when people are protected by those around them. This type of protection is indirect in that it does not involve physical components of immunity, such as antibodies, but rather results when a pathogen is less likely to infect a susceptible person because of the high numbers of protected people around them. Because this immunity is not based on “products” of the immune system, it is the least reliable. However, for some in our communities, such as those too young to be immunized or those with weakened immunity due to illness or treatment, community immunity is the only way they can be protected.
We generally talk about community immunity from two perspectives — that of the community, commonly referred to as herd immunity, and that of the individual, commonly known as cocooning:

HERD IMMUNITY
When enough people in a community have been exposed to a pathogen, it cannot spread as easily. As more people become immune, the pathogen has a smaller pool of people to infect. The result is that the community overall will have fewer outbreaks. Because not all pathogens spread with the same efficiency, the community levels of immunity necessary to benefit from herd immunity vary. For example, because measles is one of the most contagious pathogens known, a community requires almost everyone to be immune in order to stop its transmission. Or said another way, it is much more difficult for an individual to benefit from herd immunity to measles than from most other infectious agents. Vaccines have made it easier for society to reap the benefits of this type of protection. Before vaccines, diseases continued to have susceptible pools of individuals — most often infants and young children not previously exposed to the disease. This is why childhood diseases and deaths were so common.

COCOONING
This type of passive immunity is similar to herd immunity, but is more often aimed at protecting a particular individual rather than a community. Ensuring that everyone around a young infant is immune to a disease like pertussis (whooping cough) is an example of this type of indirect immunity. Another example is ensuring that everyone who visits or cares for a person being treated for cancer is healthy, so that the cancer patient whose immunity is weakened by treatment is less likely to be exposed to a pathogen.